Pioneers of the Stars (orchestral arrangement) 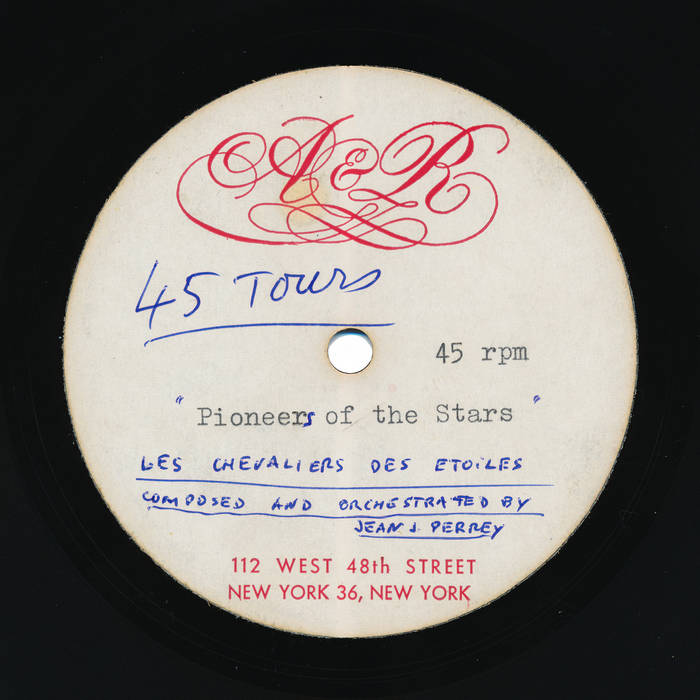 The best-known version of ‘Pioneers of the Stars’ (French title: ‘Les chevaliers des étoiles’) closed out the second side of Perrey & Kingsley’s second collaborative LP for Vanguard Records, Kaleidoscopic Vibrations. The record was one of the first “Moog albums”, predating both the popular success of Switched-On Bach and the spate of cheaply produced cash-in records that looked to exploit the growing public fascination with the strange but compellingly named synthesizer.

It is unclear whether the version included on this compilation predates the recording of Kaleidoscopic Vibrations, though a few clues point towards it being from an earlier phase of the 1960s where Perrey was experimenting with a bigger orchestral sound for his compositions.

According to the label on the acetate, the piece was recorded at A&R Studios, 112 W 48th St in New York, the same facility where The Ondioline Orchestra recorded ‘Cigale’ and ‘North Beach’ in 1964, and the first of many premises where this legendary studio operated from. A&R were forced to move to a new location in 1967, the year that Kaleidoscopic Vibrations was mostly recorded and subsequently released, suggesting that this acetate dates from an earlier time.

The acetate also has handwritten credits that state the piece was “composed and orchestrated by Jean J Perrey”. There is no mention of later co-composer Andy Badale (Angelo Badalamenti) who has been registered with ASCAP as a songwriter on the tune since Kaleidoscopic Vibrations’ release. Again, this points to the arrangement presented here as an earlier experiment that Perrey undertook solo.

Although he no longer recalled the provenance of this version of ‘Pioneers of the Stars’, Perrey did recollect that to achieve the orchestral strings and big choir sound of this arrangement he recorded smaller numbers of musicians, layered the results and bounced multiple channels on the tape recorder down to a single channel, thereby freeing up other tracks for final overdubs of Ondioline.

Transcribed and restored from a 45rpm acetate from Perrey’s daughter Patricia Leroy’s personal collection, this is the first release of this unique version of one of Perrey’s most triumphant melodies. This acetate is the single known source for this piece of music and, having been played many more times over the decades than the three or four test listens such discs were designed for, it provided decidedly less-than-stellar audio. But with extensive and detailed restoration, it transmits here, on its first release, the spirit of a superbly sprightly sound recording that would otherwise be lost to history.

This version of Pioneers of the Stars is the first release from "Jean-Jacques Perrey et son Ondioline" a forthcoming compilation of rare recordings focussing on Perrey's work with the Ondioline, the proto-synthesizer invented in France in the late 1930s by Georges Jenny, of which Perrey was the single virtuoso.

The compilation will be the first release of a number of pieces from Perrey's archive, including collaborations with Angelo Badalamenti and Billy Goldenberg, as well as an extended Ondioline demonstration recording.

Available on limited edition clear vinyl LP, CD and digital, this will be the first release on Forgotten Futures, a label set up by Wally De Backer to excavate lost works by pioneering composers, recording artists and musical instrument inventors in the sphere of electronic music.

The Hammer and The Relentless from the Boston band Malleus stop by for a chat.