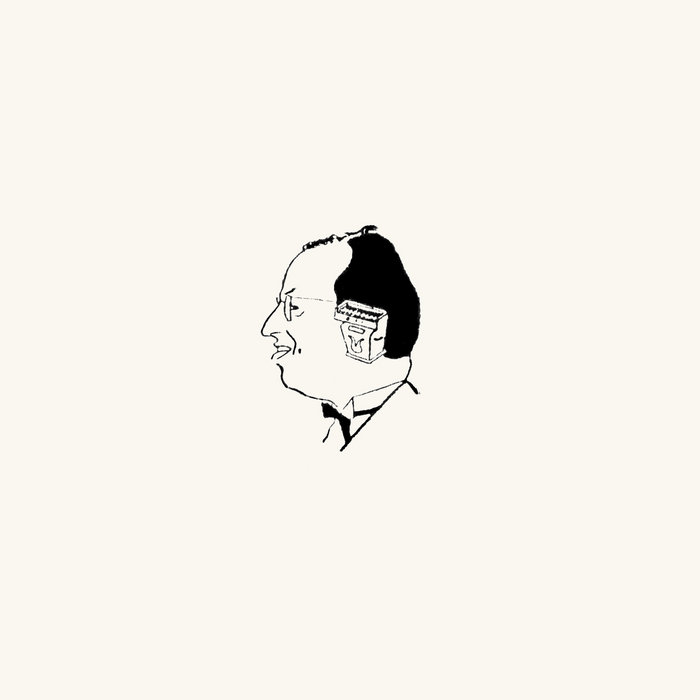 Alice J A collection of rarities from a varied career, and yet also a beautifully sequenced album that moves from the wistful to the stirring to the quirky and back again. Full of vividness and character.

P.S. Get the vinyl - the physical package and the booklet are really worth having. Favorite track: L'âme des Poètes.

When we think about the pioneers of electronic music, we tend to remember a certain kind of heroic vanguard figure. Composers who sent probes into the deep unknown, discoverers voyaging into disorienting alien zones of sound with no landmarks for the lay listener in terms of recognizably human emotions. The noises made by the innovators of sound synthesis and tape-editing – Karlheinz Stockhausen, Herbert Eimert, Iannis Xenakis, Jean-Claude Risset, and others – tend to suggest the “emotions” that might be felt by asteroids or dwarf stars, or by neutrinos and other sub-atomic particles: cold, remote, unfathomable to the human heart. Often the titles of these abstract early electronic explorations suggest distant regions of the cosmos, astrophysical phenomena, or forbidding voids: Charles Dodge’s Earth’s Magnetic Field, Musica Elettronica Viva’s Spacecraft, François Bayle’s ‘Espaces Inhabitables’.

But there was another kind of electronic futurism – a forgotten future – being proposed in the 1950s and ‘60s. It was made by composers who thrilled to the possibilities offered by the new sound-making machines and techniques, but who had no interest in leaving behind the sphere of human feeling, and instead made music whose emotional palette encompassed humour, romantic yearning, wistful nostalgia, insouciance, and frivolity. Rather than a pure plunge into the absolute unknown, this was futuristic flavoured music that expanded or elaborated upon existing genres and modes of entertainment: cabaret, light jazz, chanson, film music. These were composers who generally lived in the jobbing world of making a livelihood from music, as opposed to tenured academics working at conservatories or for experimental units of nationally-owned radio stations. They didn’t consider it demeaning or an affront to Higher Purposes for music to have dealings with such worldly and lowly considerations as being useful or appealing. So they deployed electronic instruments and tape techniques in functional contexts like music for dancing or relaxing; in incidental music or for films and animated cartoons; as jingles in commercials.

This realm of “friendly futurism” – music designed to enchant, divert, beguile, soothe, tickle, and lighten the heart – includes a number of post-WW2 figures: Raymond Scott, Joe Meek, Ron Geesin, Kid Baltan & Tom Dissevelt, the numerous technicians and composers involved in the BBC Radiophonic Workshop, and edging into the 1970s, figures like Tomita and Jean Michel Jarre. One of the most illustrious of these amiable experimentalists is composer/performer Jean-Jacques Perrey.

You could see Perrey as the polar opposite of his countryman Pierre Schaeffer, the stern, lofty-minded originator of musique concrète. The two had some brief interactions: Perrey was highly enthused by the possibilities of using tape-editing techniques in the context of popular music, but Schaeffer sniffed scornfully at the notion. For him, musique concrète was all about leaving behind music as conventionally and traditionally understood. Perrey saw it as an enrichment – a renewing extension – of precisely music’s potential in terms of melody, harmony, rhythm, arrangement, and emotional expression. In Dana Countryman’s wonderfully detailed book about Perrey’s life, Passport To the Future, the composer talks about wanting to make sounds that made people smile – “hilarious sounds”, he called them – and expressed that his goal was to create music “for fun or relaxation”.

Jean-Jacques Perrey’s career profile – which takes in performing on trans-Atlantic cruise ships, traipsing across Europe in a circus, and accompanying a stage hypnotist’s routine – could not be further from the received image of the electronic composer as a somber, bespectacled figure grappling with unwieldy banks of computers. Oh, Perrey could make purely weird, almost-abstract sounds when he wanted to – you can hear them in the more ethereal moments of this collection, such as ‘Mars Reflector’ from his 1962 record Musique Electronique Du Cosmos. But when it came to tape-editing he was drawn more to the potential for rhythmic divertissement through super-syncopations, while his grand passion for the Ondioline – the focus of this compilation – was based not just in its timbral range but its expressive flexibility.

What drew him to the Ondioline – and drove the dedication that made him become the instrument’s virtuoso non pareil – was the combination of its mimetic powers (the way it could substitute for existing instruments and lend itself to pastiche, stylistic allusion, and sonic witticisms in the style of his beloved Spike Jones) with its plangent emotionalism, the uniquely yearning ache of its timbre.

The story behind this compilation, then, involves both an inventor and his invention (Georges Jenny, who created the Ondioline in 1939 and developed it continually until his death in 1975) and the inventiveness of the musician and melodist who brought out its full range of possibilities.

Born Jean Marcel Leroy in 1929, Perrey learned accordion as a boy, picking it up by ear. Although he attended a music conservatory, he never got very good at reading music from a score and was soon drawn away from the formal studies of music into the realm of entertainment. While still at the music academy he flouted its rules by playing accordion at parties and in a jazz combo named the Jean-Jacques Perrey Quartet (a composite of the members' names, which then became his own stage name). Perrey’s dalliances in the world of variété led to his departure from the conservatory, which was not amused by his interest in amusing people. Facing a fork in the road of his life – pleasing listeners or edifying them – Perrey chose the path of delight.

In the late 1940s, Perrey’s ears were tantalized by a sound on the radio: a demonstration of a new instrument called the Ondioline by its maker Georges Jenny. Seeing the potential to create an electronic musical instrument that was more expressively flexible and wide-ranging in timbre than the theremin or Ondes Martenot, Jenny had set to work creating the Ondioline by extensively studying the harmonic signatures of acoustic instruments, and devising circuits that could approach their broad range of tone colours. As recounted in Countryman’s Perrey biography, this was done initially while Jenny was recovering from tuberculosis in 1939, using a workshop he set up in the morgue of the hospital of Saint-Hilaire. After winning the 1946 Concours Lepine, France’s most prestigious competition for new inventions, Jenny launched a company to produce Ondiolines.

Around this time Perrey had his radio epiphany and sought out the inventor. He persuaded Jenny to let him have one of the instruments in return for extracting to the utmost its capacities and exploring its unknown potentials. During this process, he developed what this collection’s compiler, Wally De Backer, describes as his phenomenal “vibrato mastery”, as well as the unique method of playing the keyboard with one hand while manipulating the Ondioline’s filters with the other to fluidly change the timbre during a performance.

“The circuitry of the Ondioline is so rich in harmonics,” says De Backer. “Out of any of the tube-based instruments from the early part of the 20th Century that made claims to imitating acoustic instruments, the Ondioline is the only one that sometimes uncannily approaches them. In Jean-Jacques’s hands it could almost be a violin. I love his bongo playing on it. But he made so many new and unique sounds, too!”

Perrey so impressed Jenny that he was hired to be the Ondioline’s public demonstrator at instrument fairs and personal showcases. As the Ondioline’s one-and-only virtuoso he was sought out to play on French pop records like Charles Trenet’s ‘L’âme des poètes’ (‘The Soul of the Poets’). Accompanying himself on piano with his left hand, while tweaking timbres and tickling the Ondioline with his right, Perrey next developed an act called Around the World in Eighty Ways: a sort of exotica cabaret routine involving emulations of everything from the Hungarian gypsy fiddle to bagpipes to castanets, perhaps the audio equivalent of Disneyland’s It’s a Small World amusement ride with its parade of national stereotypes and tourist brochure clichés. In 1957, predating Raymond Scott’s Soothing Sounds for Baby series by seven years – and the 1970s development of ambient music by many more – Perrey made a now extremely rare proto-New Age record titled Prélude au Sommeil (Prelude to Sleep) with the Ondioline emitting sounds to calm the furrowed souls of the anxious, the agitated, and the literally restless.

During this period of versatile music employment, Perrey was something of a Zelig figure, having encounters of varying duration with luminaries including Edith Piaf, Jean Cocteau, Walt Disney, Johnny Carson, Leonard Bernstein, Alfred Hitchcock and Salvador Dali. His later un-Schaeffer-like experiments with tape-splicing trickery informed the zany romps of the popular album The In Sound From Way Out, produced with Gershon Kingsley in New York for the Vanguard label. Later in the 1960s Perrey would embrace the Moog modular synthesizer and make a number of cult-beloved albums that were rediscovered during the century’s end resurgence of interest in “space age bachelor pad music” (exotica, EZ listening, retro-futurist electronic music, et al).

But the heart of Perrey’s oeuvre and arguably the great musical love affair of his life was the Ondioline. His early work with the instrument, some of it issued on this compilation for the first time, anticipates the zippy comedy of The In Sound From Way Out. ‘Chicken On the Rocks’ pivots around an itchy-funky riff whose croaky, creaky timbre looks ahead to the uses of wah-wah guitar on certain Jimi Hendrix songs or Isaac Hayes’s ‘Theme from ‘Shaft’’. It also prefigures the clavinet, that smoky-toned keyboard used on ‘70s soul-funk classics like Stevie Wonder’s ‘Superstitition’. “The Ondioline, when Jean-Jacques uses it like that, has a really attractive honk to it. The way it kind of pushes out and distorts in the mid-range,” comments De Backer. “It’s funky!”

Other pieces here such as ‘Dandelion Wine’ and the theme from the 1959 film La Vache et le Prisonnier are more reflective and wistfully melancholy, utilizing the Ondioline’s “yearning quality in the higher registers,” says De Backer. “On these recordings Jean-Jacques really made the instrument sing.”  It’s these bittersweet melodies and the tremulous way they’re played – so starkly contrasting with the wildly whimsical sample and Moog excursions of his later work – that reveal the poet’s soul inside the entertainer Jean-Jacques Perrey.

What you hear on this collection, then, are golden moments in a lifelong romance between a man and a musical instrument. This is nowhere more apparent than on the album’s second side, which is taken up entirely by an impossibly rare, edition-of-one acetate disc created to showcase the Ondioline’s mimetic capacities as regards to existing acoustic instruments as well as to illustrate the scope it offered in creating unheard and unearthly tones. Here, you can hear Perrey caressing and coaxing the potential of the Ondioline with all the inquisitive tenderness of a lover exploring the body of his beloved.

Cybele Malinowski
- photo of Jean-Jacques Perrey with his cardboard self